What makes a Masai Mara safari such a great travel experience?

The Masai Mara National Reserve in Kenya is one of the greatest wildlife reserves in the world and tops the African wildlife safari destinations. The reserve was established in 1961 with the intention to protect Masai Mara wildlife from hunters. It is found on the border of Tanzania within the Serengeti National Park Plains of the Rift Valley going southwards. It covers an area of 1,510 sq km of extensive open and luxuriant riverine forests. The Masai Mara boasts a great array of wildlife in a natural habitat. It is watered by the Mara and Talek rivers which run through the park. Because of the rivers, there are also plenty of hippos and crocodiles. 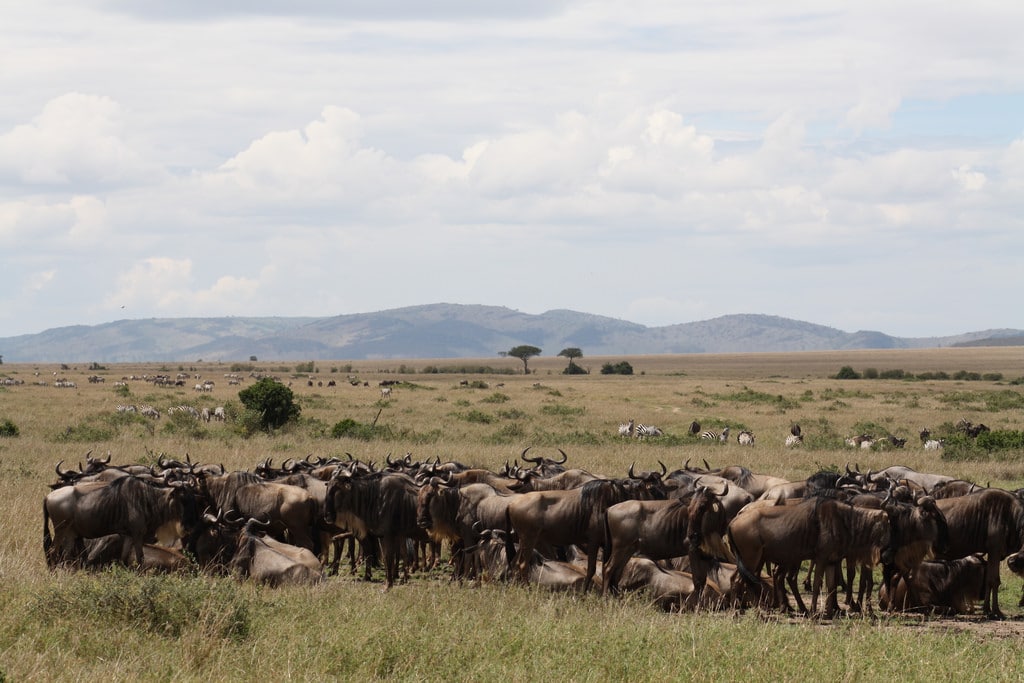 Wildebeest in the Masai Mara

Every year between June and October, about 1.5 million wildebeests cross the crocodile infested Mara River from the Serengeti plains to the fresher grassy grazing areas of the Masai Mara and return to the south around October. It is a big event in terms of wildlife tourism calendar. Towards the end of October, all the grass will be eaten by the wildebeests and over 400,000 zebras and other animals. The migration is as spectacular in the Serengeti part of the ecosystem as it is on the Masai Mara part. Several wildlife safari travelers and enthusiasts keenly follow this spectacle by timely traveling to Kenya and the non-traveling through the media such as on the Internet.

Other Wildlife In The Masai Mara

All other members of the “Big Five” are also present in the Masai Mara, much as the population of some animals such as the black rhinoceros and cheetah is cruelly threatened by predators and wildlife hunters. Hippos are found in large groups in the Masai Mara and Talek Rivers. The Serengeti plains between the Mara River and the Esoit Oloololo Escarpment offer the best game viewing spots for lion and cheetah. Kenya travelers are equally guaranteed to see leopards, hyenas, giraffe, impala, topi, baboons, warthogs, and buffalo roaming in the forested areas of the reserve plus several hundred bird species. 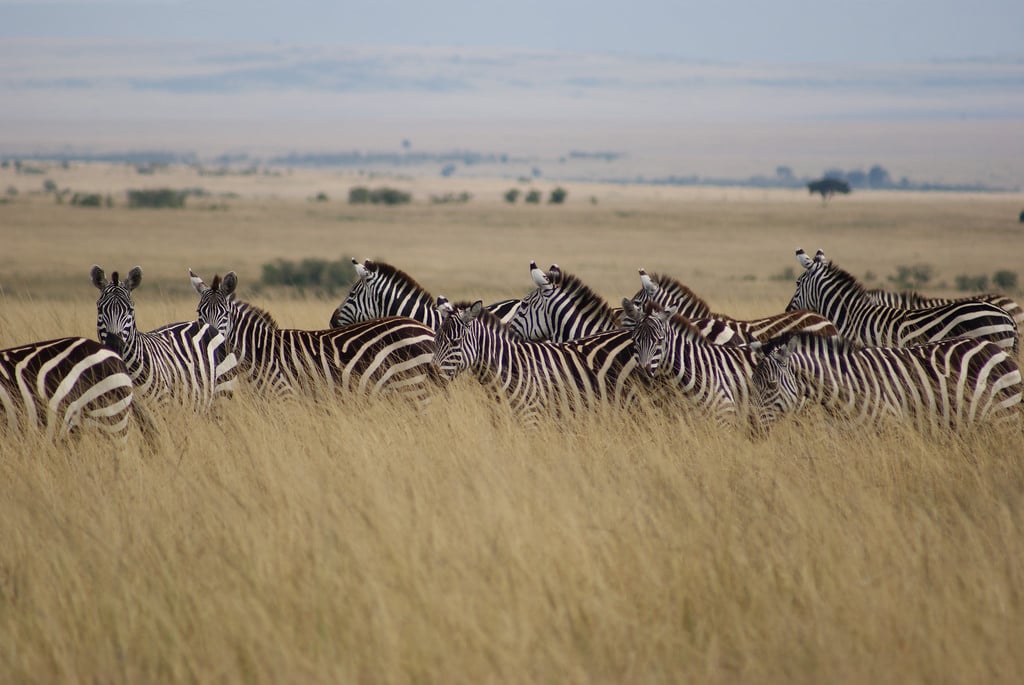 You can get there by chartering a plane which touches down at the numerous small landing strips or gets there by a 4WD vehicle. It is advisable for those driving minibusses to prioritize getting there by using the southeastern route of the reserve since the route from Nairobi is long and bumpy much as it is more spectacular. Caution is that during the rainy seasons most roads become boggy and impassable and trap vehicles. That is why you need to careful planning for your Masai Mara safari.

The months between July and October are the best time to go, the wildebeest and zebra are at their largest concentration which provides food for the lions, cheetahs, and leopards. Between May and June, the plains are filled with long grass and it makes it hard for small animals to browse. It’s mostly the large animals like the giraffes, zebras, and elephants that you can see around. So it makes it difficult for the cats to hunt so they come up with strange strategies. Dusk or late evening while on game drives presents the best time to view the animals. We highly recommend to liaise with an expert safari agent in Kenya when considering your Masai Mara safari plans. But all in all, a Masai Mara safari experience absolutely makes wildlife adventures a lifetime experience.

Africa that still prides in wildlife concentration. Masai Mara National Reserve is located in the South-western of Kenya, 290km from Nairobi. The abundance of wildlife and the remoteness of the reserve implant memories that no money can buy. The annual wildebeest migration is a clockwise fashion spectacle for about 1,800 miles from the open Serengeti plains in Tanzania to the Masai Mara National Reserve in search of green pastures and water. The wildebeest migration offers one of the best events in terms of wildlife tourism calendar in the whole world. 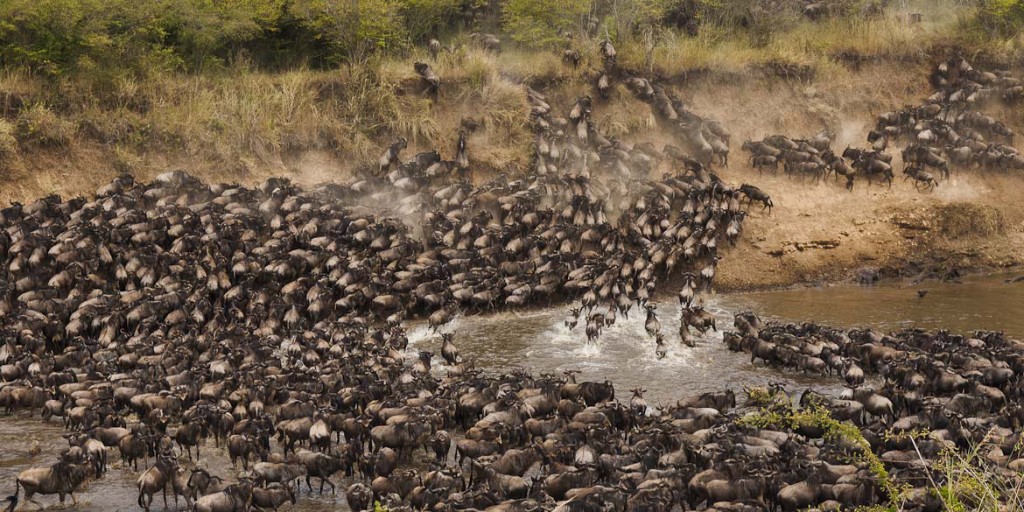 Between January and March is the time when about 500,000 calves are born in a six week period each year in the eastern Serengeti. During this time, there is plenty of rain ripened grass and water to drink.

The herds leave the Western Corridor for the northern Serengeti plains and woodlands moving targeting the fresh, tender and mineral-rich pastures in Masai Mara, an event which usually starts in late June to early July. The troops coming from the south meet here another migratory contingent: the resident wildebeest herds of the Mara region. These animals reside in the Loita Plains and Hills, northeast of the Mara until the dry season brings the tougher days and it is time to seek the evergreen Mara basin.

July is the most active month. The thousands of herds cross the Sand River, a mostly dry tributary of the Mara which roughly follows the boundary line between Kenya and Tanzania. The procession continues eastwards of Masai Mara, occupying temporarily the Keekorok area. The trek follows westward, leading the herds to face the major challenge along with their quest: crossing the Mara River and frequently also its tributary, Talek.

Between July and October, the herds of thousands of zebras, antelopes and other wildebeest migrate to the Masai Mara in Kenya in search of the fresh grass. The Masai Mara wildebeest migration journey to the Masai Mara is too long that leaving the old and weak animals to die due to exhaustion, starvation, and thirst. More wildebeest die when crossing the Mara River where the giant African Nile crocodiles dangerously attack them as the predators feed on the dead drowned animals. (Sometimes the overwhelming number of these animals jumping into the water all at once scares even the huge crocodiles.) However, this hardly affects the wildebeest population since there are about 400,000-500,000 new calves each year. Many calves die as they re-cross the river several times searching for their mothers.

Over 2 million wildebeest graze on the Savannah grassland of the Masai Mara destination until November when the short rains begin in the Serengeti. They begin their journey crossing the Mara River again and when they arrive in the eastern Serengeti in February, the migration cycle is completed and calving for the next migration begins.